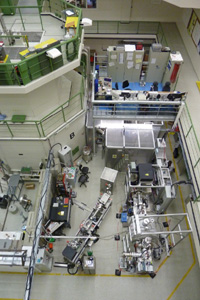 We are looking for a motivated doctoral student with background in physics having an MSc., Diploma or equivalent, to join our research project at TRIGA-TRAP. He or she will work on exciting science projects and receive funding for the entire duration of the PhD.

aims for mass measurements on short-lived fission products of uranium and californium. High-precision mass measurements on these nuclides can be used to enhance the predictive power of nuclear models and mass formulas on the neutron-rich side of the chart of nuclides. This is of particular interest to improve the understanding of the rapid neutron capture process (r-process) in stellar nucleosynthesis, and to determine the position of the neutron drip line. Measurements on these nuclides are challenging due to their short half-lives and low production rates. In addition, it is possible to perform direct mass measurements on transuranium elements using a laser-ablation ion source using small samples of about 1015 atoms. The precision of the mass surface in this mass region can be improved, since direct mass measurements of elements heavier than uranium are scarce. The experimental atomic mass data beyond uranium and information on their nuclear structure rely mostly on a network of nuclear transitions anchored to several uranium isotopes. This network has been established by decay-energy measurements, often limited by insufficient information on the level schemes and decay paths. Penning-trap mass spectrometry provides the possibility to measure directly the energy difference between mother and daughter ground states, independent of sample specific parameters, thus offering a complementary, accurate approach on the determination of the strength of nuclear shell closures. Such a shell closure, for example, manifests as sudden drop in the two-neutron separation energy S2n.

The following techniques can be learned and improved at TRIGA-TRAP:

Scientific goals for a PhD thesis are:

The scientific results obtained at TRIGA-TRAP can be submitted as PhD thesis to the University of Heidelberg (in German or English).