Our division member Dr. Andreas Mooser has been selected to receive the "IUPAP Young Scientist Prize in Atomic, Molecular and Optical Physics 2019" together with Dr. Christian Smorra (RIKEN and Johannes Gutenberg University Mainz).
The prize will be granted on July 29, 2019 on the "XXXIst International Conference on Photonic, Electronic and Atomic Collisions (ICPEAC)" at Deauville, Normandy, France. It includes a certificate, a medal and an invited presentation at ICPEAC.

Dr. Andreas Mooser received his Ph.D. in 2014 from the Johannes Gutenberg-University of Mainz for the first direct observation of single spin-transitions and the first direct high-precision measurement of the nuclear magnetic moment of a single proton.
The methods he applied to a single nucleon stored in a Penning trap for the first time can directly be applied to measure the antiproton magnetic moment. Subsequently such measurements were performed by the BASE collaboration at the Antiproton Decelerator of CERN.
The comparison of the magnetic moments of the proton and antiproton provides a stringent test of CPT invariance (Charge, Parity, and Time Reversal) with single protons and antiprotons.

We cordially congratulate Dr. Andreas Mooser on receiving this distinction of his scientific work.

(in German) and the IUPAP

11.04.19: Inauguration of the Max Planck-RIKEN-PTB Center

On April 8, 2019, the inauguration of the Max Planck-RIKEN-PTB Center

Information of the Max Planck Society on the new Max Planck-RIKEN-PTB Center: 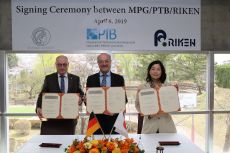 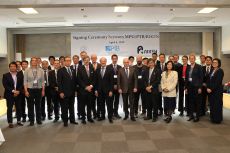 01.04.19: Klaus Blaum for the second time awarded with an ERC Advanced Grant

The four fundamental interactions and their symmetries, the fundamental constants and the properties of elementary particles, e.g. their masses, define the fundamental structure of the universe and form the basis of the well-established Standard Model of physics.

named "FunI", he focuses on the fundamental interactions. FunI will be supported with € 2.5 million for a period of 5 years.
Klaus Blaum's group will e.g. perform experiments with stored highly charged ions for stringent tests of quantum electrodynamics and special relativity. The latter will be tested by an improved examination of the mass-energy equivalence (E=mc2).

24.01.19: Klaus Blaum elected to the Royal Swedish Academy of Sciences

Our division director Prof. Klaus Blaum received a great honor: on January 16th, he was elected as foreign member of the Physics Class of the Royal Swedish Academy of Sciences, together with Richard Brenner, Uppsala University and the two new Swedish members Tünde Fülöp, Chalmers University of Technology and Stefan Kröll, Lund University.
We cordially congratulate Klaus Blaum on receiving this great honor!

The Royal Swedish Academy of Sciences was founded in 1739 and is an independent non-governmental organisation, whose overall objective is to promote the sciences, in particular the natural sciences and mathematics, and strengthen their influence in society. Today it has about 470 Swedish and 175 foreign members which are divided into ten "classes", representing ten various scientific disciplines.
Every year the academy awards the Nobel Prizes in Physics and in Chemistry as well as other prestigious awards.

) and the Royal Swedish Academy of Sciences

have proposed a new research center to intensify their successful collaboration in the domain of "Time, Constants and Fundamental Symmetries".

The application of this Max Planck-RIKEN-PTB Center for Time, Constants and Fundamental Symmetries has been approved in October 2018 for five years. The new initiative started on January 1, 2019, the official opening ceremony will be on April 8, 2019 at RIKEN in Tokyo, Japan. The total financial budget will be about 1.5 M€ per year, shared equally between MPG, PTB and RIKEN. The research center will be operated by three Co-Directors: Klaus Blaum (MPG), Ekkehard Peik (PTB), and Stefan Ulmer (RIKEN).

The MPIK participates with two divisions in the "Center for Time, Constants and Fundamental Symmetries", our division on “Physics with Stored and Cooled Ions” leaded by Klaus Blaum and the division of Thomas Pfeifer on "Quantum Dynamics and Control".

The new Max Planck-RIKEN-PTB Center will provide a synergetic and close collaboration, especially on the students' level, between experimental groups in atomic physics, antimatter physics, nuclear physics, quantum optics and metrology to tackle fore-front topics in precision measurements of time and constants of nature, to test fundamental symmetries and contribute to ultra-high precision searches for physics beyond the Standard Model of particle physics.
The leaders of the Max Planck-RIKEN-PTB Center expect that the intensified collaboration will lead to the development of novel experimental techniques which will outperform the state-of-the-art of contemporary experiments.

and the CERN Courier