Our division member Dr. Pauline Ascher has been selected by the French Physical Society SFP

(Société Française de Physique) to receive the "Prix Jeune Chercheur Saint-Gobain 2011". Since 1995, this prize is awarded annually by the SFP to young investigators for their excellent final thesis.
The SFP has published an article concerning the distinction in the October issue of its journal "Reflets de la Physique"

. In addition, the prize winner reports on her work in the "European Physical Journal Plus"

.
The award ceremony will take place on February 1st, 2013 in Paris during a general meeting of the SFP.

Our former division member Dr. Holger Kreckel has been selected to receive a Starting Grant from the European Research Council

for his research project ASTROLAB. The project with the title "Cold Collisions and the Pathways toward Life in Interstellar Space" aims to investigate fundamental molecule reactions under interstellar conditions. The ERC Starting Grant will support this work with 1,49 million Euro for the next 5 years.
Holger Kreckel studied physics at the University of Heidelberg and in 2003 he completed his PhD thesis on "Internal excitations of stored triatomic hydrogen molecular ions" in our division. We congratulate Holger Kreckel on receiving this prestigious ERC Starting Grant.

Please read more in the press release of the MPIK ... >

With the Helmholtz Prize, the "Helmholtz-Fonds" and the "Stifterverband für die Deutsche Wissenschaft" honour outstanding scientific and technical research work in the field of metrology. The prize consists of a certificate and is endowed with € 20 000.

The award ceremony took place in the Stadthalle Braunschweig following the Helmholtz Symposium on the occasion of the completion of PTB's first 3·42 - 1 years. Read more on the PTB Website ... > 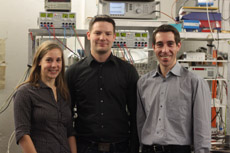 for precision measurements, which is the most distinguished German award in the field of metrology. The three prize-winners are awarded for their high-precision measurement of the g-factor of the remaining bound electron in a single hydrogen-like silicon ion (28Si13+) by using a triple Penning trap system. The comparison of the new measured g-factor with the value based on theoretical calculations represents to date the most accurate test of bound-state QED calculations in strong fields. The theoretical and experimental value of the g-factor are in excellent agreement. The experimental work of the awarded researchers thus is an important contribution to a deeper understanding of the fundamental forces in the universe.

Several online journals are reporting on the Helmholtz Prize 2012, here a selection: