Our division member Dr. Sven Sturm has already been awarded the Otto Hahn Medal 2012 and the SAMOP Dissertation-Prize 2013 of the German Physical Society (DPG) for his PhD work. He has also been selected to receive the Dissertation Award 2013 of the Faculty of Physics of the Johannes Gutenberg University Mainz. With this prize outstanding doctoral theses are honored. It is endowed with 1.000 Euro. The award ceremony took place on Friday, October 25, 2013.

Within his PhD work

Dr. Sven Sturm performed high-precision measurements of the g-factor of the remaining bound electron in a single hydrogen-like silicon ion (28Si13+) by using a triple Penning trap system. This allows to date the most accurate test of bound-state QED calculations in strong fields.

We cordially congratulate him on receiving this further distinction of his scientific work.

Please read also the press release of the University Mainz

. The award ceremony takes place on 5 June 2013 at the International Nuclear Physics Conference

Please read also the detailed press release of the MPIK

Press releases of the Faculty of Science at the Istanbul University (in Turkish): 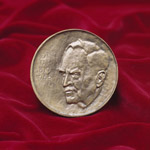 After he has been awarded the Dissertation-Prize 2013 of the German Physical Society (see press release of 21.03.13), Dr. Sven Sturm has been selected to receive the Otto Hahn Medal 2012 for his doctoral thesis

, which he wrote within our division at the University of Mainz. The results of his PhD work allow to date the most accurate test of bound-state QED calculations in strong fields.

is awarded to young scientists in recognition of their outstanding scientific achievements and to motivate them for a future university and research career. It is accompanied by a monetary award of 7500 Euro. Since 1978 more than 800 scientists have received this award. The medalists are awarded during a ceremony at the General Meeting of the Max Planck Society at the beginning of June 2013.
We cordially congratulate Dr. Sven Sturm on receiving this prestigious scientific award.

Please read also the press release of the MPIK

Dr. Sven Sturm is the winner of the SAMOP Dissertation-Prize 2013

of the German Physical Society (DPG). He convinced the jury with his talk "The Standard Model under Extreme Conditions: The g-Factor of Highly Charged Ions" on the Dissertation-Prize Symposium

on 20. March 2013 in Hannover, Germany. The goal of the dissertation prize

is to acknowledge the outstanding research within the scope of a dissertation and its excellent procurement in spoken and written form. The prize is endowed with 1500 Euro and a travel grant for the Spring Meeting amounting to 500 Euro.

Within his PhD work

Dr. Sven Sturm performed high-precision measurements of the g-factor of the remaining bound electron in a single hydrogen-like silicon ion (28Si13+) by using a triple Penning trap system. This allows to date the most accurate test of bound-state QED calculations in strong fields.

On 27 March 2012 Dr. Sven Sturm already received the Helmholtz Prize 2012 for his research work together with Dr. Anke Wagner and division director Prof. Dr. Klaus Blaum.
We cordially congratulate him on receiving this further distinction of his scientific work.

Please read also the press release of the MPIK

Prof. Klaus Blaum has been selected to receive the G. N. Flerov Prize 2013

The G. N. Flerov Prize was instituted in 1992 by the Resolution of the 71st Session of the Joint Institute for Nuclear Research (JINR

) Scientific Council to perpetuate the memory of the eminent russian physicist Georgy Nikolaevich Flerov (1913-1990) and to reward scientists for their outstanding contributions to nuclear physics. It is one of the most important prizes of Russia in the field of nuclear physics and awarded once in two or three years. This year the prize has been awarded in March on the centenary of the birth of G. N. Flerov. The prize ceremony will take place in Dubna, 130 km north-west of Moscow on Friday, May 24, 2013.
We cordially congratulate Klaus Blaum on receiving this prestigious scientific award.

and in the following press releases:

The nucleosynthesis process of rapid neutron capture (r process) has been suggested to explain the abundance of lighter elements close to stability and heavier, neutron-rich nuclides that accumulate near shell closures as observed in our Solar System and Galaxy. Supernovae have been favored for a long time to be the astrophysical site where this r process takes place. It has been discussed, that neutron stars could be an alternative r process site because of their large neutron content. The r process could occur during the decompression of crustal matter ejected into the interstellar medium. The astrophysical plausibility of this scenario most importantly requires a proper understanding of the composition of the outer crusts of neutron stars. The modeling of the composition of neutron-star crusts depends strongly on the knowledge of binding energies of neutron-rich nuclides near the N=50 and N=82 shell closures. Thus, high-precision mass measurements are indispensable.

In a just in Physical Review Letters published article R. N. Wolf et al. report on the first precise measurement of the mass of the exotic nuclide 82Zn. The mass measurement was performed with the ISOLTRAP setup at the ISOLDE-CERN facility using a recent development of time-of-flight mass spectrometry for on-line purification of radioactive ion beams to access more exotic species. This measurement represents the frontier of knowledge for the N=50 shell and as such the limit of knowledge for fathoming the neutron-star crust composition. Based on the new experimental 82Zn mass value, calculations of the neutron-star crust composition were performed. The obtained composition profile is not only altered but now constrained by experimental data deeper into the crust than before.

Figure 1 of this PRL article, the depth profile of a neutron star with the changed composition profil of the crust, has been selected for the front cover of the PRL issue

and the following press releases: