Although at first sight it seems very unlikely, negatively charged hydrogen molecules (H2– ions) can be metastable with a lifetime of a few microseconds. Experiments of the group "Molecular quantum dynamics and stored ion beams" of Andreas Wolf showed how hydrogen molecules can hold on to an extra electron for several microseconds. These molecule ions are rapidly rotating, they are very large and are finally decaying into neutral hydrogen molecules. The experimental results have just been published in Physical Review Letters. They confirm theoretical predictions.

Detailed information also in the press release of the MPIK

and the reports of APS Physics

The time-of-flight (TOF) ion-cyclotron-resonance (ICR) technique for the mass determination of short-lived nuclides has recently been improved by the replacement of the quadrupolar excitation by an octupolar excitation of the ion motion. In a just in Physical Review Letters published article S. Eliseev et al. present the first analytical description of this novel octupolar technique and report on its application for a direct Penning-trap mass-ratio determination of the 164Er-164Dy mass doublet.
The new technique provided an increase in resolving power by more than an order of magnitude and, thus, allowed a simultaneous measurement of the cyclotron frequencies of 164Dy+ and 164Er+. 164Er is a promising candidate for a search for neutrinoless double-electron capture. An observation of this neutrinoless transition would prove that the neutrino is a Majorana particle. The measured Qee value of 25.07(12) keV for 164Er results in a half-life of 1030 years for a 1 eV mass of a Majorana neutrino.

In a just in Physical Review Letters published article S. Sturm et al. report on the development of a novel technique for a phase-sensitive measurement of the modified cyclotron frequency of an ion in a Penning trap at energies close to the thermal cooling limit. At such ultralow energies energy-dependent systematic frequency shifts are in most cases negligible and cyclotron frequency measurements at the uncertainty level of 1 ppt (10-12) can be performed. The experimental setup used for the studies consists of a cylindrical Penning trap as part of a triple trap system, where hydrogenlike ions can be confined for nearly unlimited time under well-controlled conditions in a small volume in space.

) have just been published in "Journal of Physics: Conference Series".

01.09.11: Direct Measurement of the Free Cyclotron Frequency of a Single Particle in a Penning Trap

Penning traps offer unique possibilities to study single charged particles under well-defined, controllable experimental conditions. Using Penning traps the properties of charged particles and their antiparticles can be compared with ultrahigh precision, and thus provide stringent tests of the matter-antimatter symmetry. The most precise direct test of Einstein’s famous equation E = mc2 is based on Penning trap experiments.

In a just in Physical Review Letters published article S. Ulmer et al. describe a novel measurement scheme for the direct determination of the free cyclotron frequency νc of a single particle stored in a Penning trap. The experiment aims at measuring the g factor of the proton gp and the antiproton

in a cryogenic Penning trap by means of the continuous Stern-Gerlach effect. The applied method is based on the dressed states of mode coupling. In this novel measurement scheme both radial oscillation modes of the trapped proton are simultaneously coupled to the axial mode, which has never been demonstrated before.

) have just been published in Hyperfine Interactions. Our division has overall contributed nine articles.

More information about the TCP2010 conference proceedings and the contributed articles of the division ... >

21.07.11: Neutrinoless double-electron capture and the nature of the neutrino

We already know that neutrinos are massive particles but we still don't know whether the neutrino is a Dirac or a Majorana particle. So far the only feasible way to prove the existance of the Majorana-type of neutrinos would be an observation of neutrinoless double-electron transformations, e.g. the neutrinoless double-beta decay, which is the most probable process. However, in some special cases a strong resonant enhancement of the probability of neutrinoless double-electron capture is expected. The main uncertainty in the determination of the resonance conditions lies in a poor knowledge of the Qee values. This can be overcome by means of high-precision Penning-trap mass spectrometry.

In a just in Physical Review C published article S. Eliseev et al. report on high-precision atomic-mass-difference measurements between the nuclides 156Dy and 156Gd. The measurements have been performed with the Penning-trap mass spectrometer SHIPTRAP 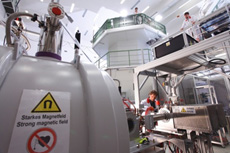 First scientific results of mass measurements at TRIGA-TRAP appeared in the renowned journal Physical Review C. In this paper, masses of rare earth elements, particularly Gd and Hf are presented. Some of them showed significant deviations from the atomic mass evaluation (AME). The measurements were performed using a source for stable isotopes and are currently extended to other species in this mass region. In parallel, the coupling of TRIGA-TRAP with the nuclear reactor

is being pursued in the TRIGA-SPEC collaboration.

08.07.11: Most precise value of the g factor of a bound electron determined

In a just in Physical Review Letters published article S. Sturm et al. report on the determination of the g factor of the electron bound in hydrogenlike 28Si13+ by using a single ion confined in a cylindrical Penning trap. From the ratio of the ion's cyclotron frequency and the induced spin flip frequency, g = 1.995 348 958 7(5)(3)(8) was obtained.
Previous measurements were restricted to the regime of light elements such as carbon and oxygen. An extension to heavier systems like silicon provides new insights into fundamental physics.
The excellent agreement between the new experimental and the state-of-the-art theoretical value of g = 1.995 348 958 0(17) represents to date the most accurate test of bound-state QED calculations in strong fields. So far uncalculated values of higher-order two-loop contributions become visible for the first time.

In a just in Physical Review Letters published article S. Ulmer et al. report on the first spin flips ever observed with a single trapped proton. This is an important milestone towards a new test of the matter-antimatter symmetry, the direct high-precision comparison of the magentic moments of the proton and the antiproton.
The experiment is performed in a cryogenic double Penning trap. In such systems protons can be stored arbitrarily long. Spin-quantum flips are induced by a radio frequency drive and observed non-destructively by means of the continuous Stern-Gerlach effect. Therefore the single proton is stored in a Penning trap with a very large magnetic field inhomogeneity. A spin-quantum jump changes the axial frequency of the trapped proton by 3/10 000 000 parts. These tiny frequency changes, 190 mHz out of 674 kHz, were detected unambigiously, which directly proofs the first direct observation of single-proton spin flips.
The fact that the authors have managed to procure this elusive data means that they have overtaken their research competitors at Harvard University and are now the global leaders in this field.

The article has been selected for a Viewpoint in Physics. Please read also the viewpoint on the article by Edmund G. Myers (Florida State University): pdf, 399 KB

extending the previous measurements of N = Z + 1 nuclides measured at other facilities so far. Thus this work marks a milestone towards high-precision mass measurements of the heavy N = Z nuclides, e.g., 80Zr and 84Mo.
Compared to the Atomic Mass Evaluation 2003 a systematic shift of the mass surface by up to 1.6 MeV towards less bound nuclei is observed causing significant abundance changes of the ashes of astrophysical x-ray bursts.
Surprisingly low alpha separation energies (Sα) for neutrondeficient Mo and Tc are found, making the formation of a ZrNb cycle in the rp process possible. Such a cycle would impose an upper temperature limit for the synthesis of elements beyond Nb in the rp process.

The article has been selected for a Viewpoint in Physics. Please read also the viewpoint on the article

by Jens Dilling and Chris Ruiz.

In a recently in Phys. Rev. Lett. published article X. L. Tu et al. report on the first direct mass measurements of the short-lived A = 2Z - 1 nuclides 63Ge, 65As, 67Se, and 71Kr using a new implementation of the storage ring mass spectrometry. The experiment has been performed at the Cooler-Storage Ring at the Heavy Ion Research Facility in Lanzhou, HIRFL-CSR

Precise mass values for the nuclides along the rp-process path are needed to compare models with observations. The rapid proton capture process (rp-process) is a sequence of proton captures and β+ decays near the proton drip line. At waiting points the proton capture is effectively suppressed and the rp-process has to proceed via the slow β+ decay. Three major waiting points have been identified: 64Ge, 68Se, and 72Kr. Their estimated long lifetimes provide the explanation for the extended tails that are observed in the light curves of many x-ray bursts. As all β+ half-lives are known, the most critical parameter becomes the proton separation energy (Sp), which can be deduced from the mass excess.
64Ge is the most important potential waiting point because it is encountered first. A precise measurement of Sp (65As) is needed to determine to which degree 64Ge is a waiting point. The exotic 65As has been out of reach for Penning trap mass measurements so far and could now be measured for the first time. X-ray burst model calculations with the new mass excess of 65As suggest that 64Ge is not a significant rp-process waiting point.

05.02.11: Investigating the nature of the neutrino with neutrinoless double-electron capture

In a recently in Phys. Rev. Lett. published article S. Eliseev et al. report on a determination of the Q value of 152Gd performed with SHIPTRAP

at GSI Darmstadt. Therefore, a precise direct measurement of the cyclotron-frequency ratio of singly charged ions of 152Sm and 152Gd was performed with a time-of-flight ion cyclotron resonance technique. From the frequency ratio the Qee value of 152Gd can be calculated. The Qee value of the double electron 0+ -> 0+ transition between ground states of 152Gd and 152Sm has been determined to be 55.70(18) keV. This Qee value results in a half-life of 1026 yr for a 1 eV neutrino mass. With this smallest half-life among known neutrinoless doublebeta transformations, 152Gd is a promising candidate for the search for neutrinoless double-electron capture.