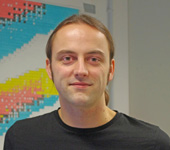 Our division member Dr. Robert Wolf has been selected to receive the Wolfgang-Paul-Dissertation-Prize 2014. The German Society for Mass Spectrometry (DGMS

) is presenting every year the Wolfgang-Paul-Prize for Student Research

to the best Diploma resp. Master and PhD theses in the field of mass spectrometry. Dr. Robert Wolf is awarded one of the two Wolfgang-Paul-Dissertation-Prizes 2014 for his doctoral thesis, which he wrote in the year 2013 within the working group of Prof. Dr. Lutz Schweikhard

at the Institute of Physics of the University of Greifswald, Germany.
Dr. Wolf also receives the "GENCO Award" of the GSI Exotic Nuclei Community

. With this prize outstanding theses in nuclear physics are honored.

The main focus of his PhD thesis

at CERN. The so-called "isobar separator" allows to trap charged particles by the use of electrostatic fields and to achieve a high mass resolving power in the order of 100,000 in just a few milliseconds flight time. This technique enables to remove isobaric contaminations from an ion beam and therefore was a crucial step for the first mass measurement of the short-lived nuclide 82Zn. The nuclide was postulated by different mass models to be a constituent of the outer crust of neutron stars, which could be disproved by the mass measurement. Furthermore, this type of device has been used as a mass spectrometer of its own on short-lived nuclides for the first time and enabled the first mass measurements of 53Ca and 54Ca which proved a neutron magic number at N=32.

Dr. Robert Wolf studied Physics at the Ernst-Moritz-Arndt-University Greifswald from 2003 to 2008 where he also finished his Diploma thesis on a multi-reflection time-of-flight mass separator test setup which he then moved to CERN. Currently, he works in the group of Prof. Blaum to set up a Penning trap experiment for g-factor measurements of hydrogen-like heavy ions.

Dr. Robert Wolf will be awarded the Wolfgang-Paul-Dissertation-Prize, which is endowed with 5.000 Euro, during a ceremony at the 47th annual meeting of the German Society for Mass Spectrometry

on March 3, 2014, in Frankfurt am Main, Germany. The award honours Prof. Dr. Wolfgang Paul who received the Nobel prize in Physics in 1989 for the development of the ion trap technique (shared with Hans Dehmelt). Prof. Paul was the third president of the Alexander von Humboldt Foundation (1979-1989).
The prize ceremony of the GENCO Award will take place on March 6, 2014 during the NUSTAR Annual Meeting 2014

We cordially congratulate Dr. Robert Wolf on receiving this distinctions of his scientific work.