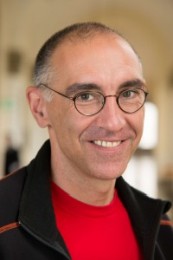 Prof. Dr. Thomas Udem has been working on precise laser spectroscopy for many years developing technologies such as frequency interval dividers and optical frequency combs. Among other applications these techniques have largely improved the experimental knowledge of the energy levels of hydrogen and allowed to construct all optical atomic clocks. Currently he is leading the hydrogen experiments within the Laser Spectroscopy Division of MPQ and an experiment that is dedicated to extend high-resolution laser spectroscopy to hydrogen like helium ions. In addition to the hydrogen activities he was leading a project to design an astronomical frequency comb that is now being used to detect extrasolar planets at one of the largest telescopes operated by the European Southern Observatory (ESO). Within an existing collaboration with PTB he is contributing to an optical fiber link between MPQ and PTB and also between MPQ and Karlsruhe. Previously it was possible to demonstrate that optical frequencies can be transmitted with 19 digit accuracy over such a long distance.

Inspiring young researchers:
Thomas Udem is regularly teaching at the Ludwig-Maximilians-University, Munich. Besides advanced courses on quantum optics he is teaching the first and third semesters in mechanics and optics with more than 500 students. He is frequently invited to teach at schools at places such as Varenna or Les Houches.

International recognition:
Thomas Udem received an ERC Advanced Grant in 2017. He is frequently invited to give colloquia and presentations at national and international scientific meetings. He is a fellow of the Optical Society of America and the American Physical Society. His 160 refereed publications have been cited more than 11,000 times with an h-index of 48. His contributions have been recognized by international awards, among them the Röntgen Award 2006 and by the 2013 EPS Prize for Research in Laser Science and Application "for significant contributions to the development of optical frequency combs and their extension into the vacuum-ultra-violet region…".