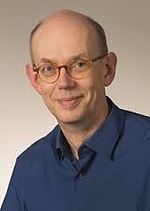 PD Dr. Ekkehard Peik has pursued his scientific career in the field of quantum optics and atomic physics with laser-cooled atoms and ions. As a graduate student at MPQ in Munich (group of H. Walther) he was member of the team that observed the first Coulomb crystals of laser cooled trapped ions. During his Ph.D. work he developed the "endcap" version of the Paul trap that is now a standard design in single-ion experiments and obtained the first laser excitation of the forbidden J=0 -> 0 transition (in In+), that is used in most of the optical clocks investigated today. As a postdoc in the group of C. Salomon at ENS in Paris he observed Bloch oscillations of cold atoms in an optical lattice, a seminal experiment for condensed matter studies with quantum gases. At MPQ and in cooperation with the group of T. Hänsch he contributed to the first optical frequency measurement of a trapped ion with a femtosecond frequency comb generator. Joining PTB in 2001 opened the opportunity to develop optical clocks of the highest precision in an environment that is ideal to work with a team of experts uniting the required professional skills and the required experimental infrastructure. Some of Ekkehard Peik's achievements with the group "Optical Clocks with Trapped Ions" at PTB are:

Inspiring young researchers:
Ekkehard Peik has supervised more than 20 PhD students and postdocs and is frequently invited to give lectures at international schools or tutorials and workshops. The Time and Frequency Department at PTB welcomes around 200 visiting groups each year, from scientists to the general public. Outreach activities cover subjects from ubiquitous applications of clocks, to recent developments in quantum physics and profound concepts in relativity and cosmology.

International recognition:
Ekkehard Peik is chair of the Executive Committee of the European Frequency and Time Forum, the most widely attended series of conferences in the field in Europe, and German delegate to the Consultative Committee for Time and Frequency (CCTF) at BIPM. He has been coordinator of the project "High-accuracy optical clocks with trapped ions" of four national metrology institutes within the European Metrology Research Program EMRP. He has frequently been invited as plenary speaker at major conferences, like recently at ICAP (2014), ICOLS (2015) and the Ginzburg Centennial Conference on Physics (2017).