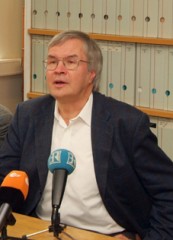 Professor Hänsch has been a Director at the Max-Planck-Institute of Quantum Optics (MPQ) from 1986 until 2016. He presently leads an active Emeritus Group at the MPQ, and he has an appointment as Carl-Friedrich-von-Siemens Professor for Experimental Physics at the Ludwig-Maximilians-University, Munich (LMU) until October 2026. Theodor Hänsch is widely known for his seminal contributions in the field of laser spectroscopy. His early work includes the first narrowband tunable dye laser, the invention of commonly used techniques of Doppler-free laser spectroscopy, and the first proposal for laser cooling of atomic gases. Since the early 1970's, Hänsch has pursued precision spectroscopy of the simple hydrogen atom, which permits unique confrontations between experiment and fundamental theory. In the late 1990's, he invented the revolutionary frequency comb technique for measuring the frequency of light with ultrashort pulses. In current research, he is exploring novel applications of laser frequency combs, from the calibration of astronomical spectrographs to highly sensitive molecular spectroscopy and label-free bio-imaging. Exploring the quantum physics of cold neutral atoms, Hänsch and his coworkers have realized the first two- and three-dimensional atomic lattices bound by light, they have demonstrated the first atom laser that emits a continuous beam of coherent matter waves, and they have shown how to integrate a quantum laboratory for ultracold atoms on a microfabricated "atom chip". With a Bose-Einstein condensate in an optical lattice potential, they have been the first to observe a quantum phase transition between a wave-like superfluid state and a particle-like Mott insulator crystal. His more than 650 publications have been cited 39 000 times, leading to an h-index of 91 (Web of Science).

Inspiring young researchers:
Theodor Hänsch is a prominent scientist who is much in demand as a public speaker. About 100 students have obtained their doctoral degree in his laboratory, and more than 40 of his former students and postdocs are now Professors at Universities around the world.

International recognition:
In 2005, Theodor Hänsch has been awarded the Physics Nobel Prize jointly with John L. Hall and Roy Glauber "for his contributions to the development of laser-based precision spectroscopy, including the optical frequency comb technique". Other Prizes and Awards include the Stern Gerlach Medal of the DPG and the Frederic Ives Medal of the OSA. Theodor Hänsch holds 4 Honorary Doctorates, and he is an elected or honorary Member of many Academies and Professional Societies, including the US National Academy of Sciences, the French Académie des Sciences, the German National Academy Leopoldina, and the Pontifical Academy of Sciences.